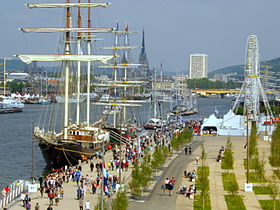 Held every five years on the banks of the Seine in the heart of Rouen, the Armada is a gathering of tall ships, boats and military vessels. This is one of the largest events in the world of the sea During the event, the different neighborhoods and towns of Rouen Seine revet colors of different nationalities guests boats and thousands of sailors wandering the streets Rouen. Every night, the party is waiting for you (concerts, fireworks), while the traditional “Parade Seine” (starting from Rouen to Le Havre, where boats leave for the sea) concluded the event.

In July 2011, that the president of the organization, Patrick Herr, officially announced that the 2013 edition of the Armada would take place, after a budgetary problem. The Rouen Armada of 2013 was therefore the sixth edition of Rouen Armada (after 1989, 1994, 1999, 2003 and 2008) and celebrated its 25th anniversary. It was held from 6 to 16 June 2013 on the banks of Rouen while these were completely renovated